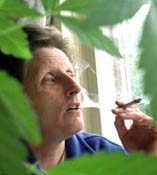 It is with great sadness that I inform you that our great friend and campaigner Biz Ivol, of The Orkney Isles has passed away.

Biz suffered from MS and had caught a chest infection, she had wanted to "escape" for some time, so refused any medication and died peacefully at home at 11pm last night.

Biz was the lady who first made Cannabis Chocolate for fellow MS patients, her efforts created THC4MS and later herself and others campaigned for the law to change, the reclassification back in January this year was down to Biz and others relentless campaign to allow cannabis as a medicine.

Last year myself and members of THC4MS and the LCA made the long journey to support Biz at trial for using cannabis as a medicine, back them she had made the decision to commit suicide if the case did not fall in her favour, and hours before we arrived in Orkney, Biz was told her trial was dropped. She attempted but failed to commit suicide, and made a promise to us that she wouldn't attempt to do it again.

Since we met Biz myself and others have enjoyed many a conversation with her, we know she had good friends and neighbours looking out for her, and she didn't have to worry where her next smoke would come from, although close to the end Biz was only out of bed for a few hours a day, she was comforted by regular visitors, phone calls, and of course plenty of pre rolled joints (her favourite medication!)

The thing Biz said she would miss the most would be her beautiful garden, and her cat Willy, she wasn't scared of dying, and had already arranged a natural funeral.

I know Biz would have wanted Cannabis to be legal for all, it was one of the last public speeches she made, for the LCA Conference in Norwich 2003.

I know that many of us will shed a few tears (I already have had a few) but in all honesty those who knew Biz will be happy to know she is no longer suffering and is at peace.

Biz was a fantastic woman, a fighter, a campaigner, a friend and a warrior, many will miss her, please keep her in your hearts.

At times like these people often like to offer flowers or donations, as yet we have not heard what Biz had asked for, but please do contact us if you would like to donate, we will let you know where to send it to.

With Love and Sympathy to those who knew Biz,

Biz Ivol is a peaceful middle-aged lady who suffers from Multiple Sclerosis. She lived a quiet life in the Orkneys until becoming somewhat famous through her honesty after admitting that she used cannabis to help relieve some of the symptoms of her illness.

Many people have done the same, being forced to break the law to obtain a supply of a helpful medicinal plant that they are unable to obtain illegally.

The big difference between Biz and most fellow sufferers is that she went further and learned how to grow it and use the plant to make chocolate that eased her symptoms without having to smoke the cannabis.

Biz Ivol, like Colin Davies, another UK man who was punished for supplying cannabis to seriously ill people who approached him for help, began to post out chocolate to fellow MS sufferers around the country.

Like Colin, Biz was approached by the press and told her story honestly.

The result: raids by the so-called Drugs Squad, search and arrest, then to be made to suffer unbearable stress whilst waiting almost 2 years for her trial which began in June 2003.

As most people know, stress such as that caused by waiting to go to court worsens the symptoms of this almost unbearable illness many times. Over that two years Biz Ivol's condition worsened considerably, as did her eyesight and the use of her hands.

One is forced to ask why it should take so long when the case was not unduly complicated and the court not over-run with other cases.

One is forced to ask why she was ever taken to court in the first place.

The majority of UK citizens, like others, in surveys express disquiet over the prosecution of victimless but seriously ill medical cannabis users. The House of Lords and the BMA have asked for leniency. There had already been several successful defences based upon medical necessity.

Who will stand up and point the accusing finger at Biz? Only those paid by the state to do so.

In June 2003, Biz said that she could bear to suffer no longer and would take her own life after the case, whatever the result.

Whatever her choice, however we feel about suicide, we must not let her suffering be in vain.

On July 2, the case was dropped after the Sheriff's Court heard a report from Biz Ivol's doctor, Simon Kemp, that the progression of Multiple Sclerosis made Biz unfit to be able to continue her trial. Prosecution and defence accepted this and the case was discontinued. The Sheriff said, "This is a sad and unsatisfactory end to this case. It has attracted a great deal of media attention. It may well be that Ms Ivol feels unable to continue with her defence of necessity. Any question of decriminalisation or legalisation of cannabis is a matter for the politicians.. this case will not proceed again."

Unfortunately, this was not exactly what Biz had wanted - she had wanted a verdict of not guilty.

That morning, several members of the LCA Executive who had travelled to Orkney to attend the trial and support Biz, heard that she had been rushed to hospital with a suspected overdose of paracetamol. She was unable to attend the hearing.

Later that day, Biz regained consciousness and was able to talk. A couple of days later, after being flown to Aberdeen and back for tests, Biz was able to return home, where she told us that she was very tired and wished to rest and let others take over her campaign.

We must rid ourselves of this evil application of the law. Now!